September 3, 2015 Posted by Henk Jordaan Angelina's, Blog, CBS Studio Center, chocolate, favorite food, Gold's Gym, Heifer International, Hollywood Bowl, Marianne Muellerleile, Mike & Molly No Comments
It was a pleasure to meet and talk to the talented and super nice actress, Marianne Muellerleile at CBS Studio Center. Marianne has been there and done that literally! She has been in the biz for over 40 years and has been active in film, television and stage.
She has guest starred in over 150 television series (as a regular on Life with Bonnie as Gloria and on Passions as Norma.) She has a recurring role as Connie on Mike & Molly. As a character actress for comedy and drama, you may have seen her on Parenthood, NCIS, Curb Your Enthusiasm, CSI, The Mentalist, Anger Management or 3rdRock from the Sun or in movies such as Some Kind of Beautiful, Return to Me, Liar, Liar, and The Terminator to name a few.
Marianne has been in over 80 commercials, including Pizza Hut, 7-Eleven, Frito-Lay, IBM or Sprint. Recently, she performed at the Mark Taper Forum in The School for Scandal and the Hollywood Bowl in The Sound of Music.
It doesn’t seem like she would have time to volunteer, but Marianne is very active in many organizations. Her number one charity for the last ten years has been Heifer International.
FYI: Marianne’s favorite food is chocolate. She highly recommends the hot chocolate at Angelina’s in Paris. For physical activity (and maybe to work off a few chocolate calories), she goes to Gold’s Gym three days a week.
The next time that you turn on the television to watch a movie, television show, or commercial, you will probably see Marianne! 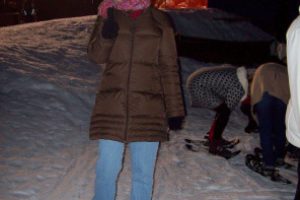 Snow? On Memorial Day? What’s Up with that?

When was the last time you saw snow in May[...]

Do You Have a Healthy Heart?

Veggie Healthy Heart Are you taking care of your heart,[...]